THE first weekend of May saw auction buyers out in force across Australia, with uncharacteristically fierce bidding action as the temperature dropped.

Unlike other years, sellers and buyers are seemingly not deterred by the cooler months, and are capitalising on one of the best auction markets ever to be seen.

Australasia’s largest property group had 620 auctions booked for the week, with 283 going under the hammer on Saturday alone. The preliminary national clearance rate of 82 per cent, maintained the ongoing streak of above 80 per cent for more than 12 weeks.

Agents and auctioneers around the country continue to spruik one clear message to sellers; take your properties right through to auction day. Reserves set by sellers are continually smashed, due to the fierce bidding process from an increased number of buyers.

The standout market of the day was Adelaide at 87 per cent clearance, closely followed by Sydney at 86 per cent, and Melbourne at 85 per cent.

“The apartment market in the inner city and inner west is continuing to gain momentum, as buyers are looking at different segments with house prices well exceeding their budgets,” Mr Pattaro said.

“The middle house market between $1.3-$1.8m is the strongest it has been, due to many more buyers being priced out,” he said.

“There is no evidence to suggest the market is slowing down, and with more stock coming to market, it makes the ideal time to sell and buy, knowing you will be able to secure your next home once you sell.” 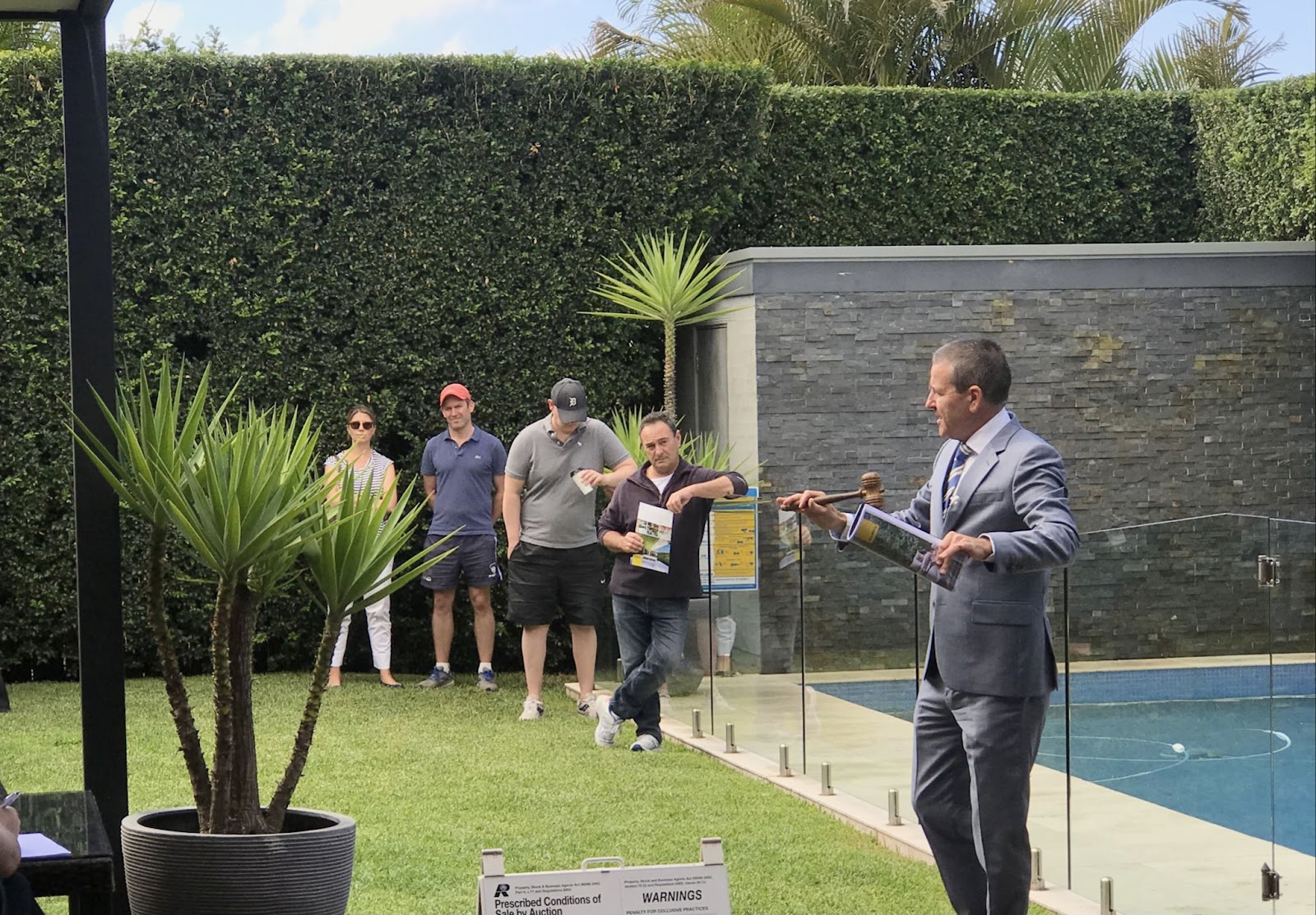 The highest sale of the day nationally was of a beautifully renovated family home at 20 Virginia Street, Kensington selling for $5,750,000.

Ray White Double Bay associate director and auctioneer James Keenan said the sellers were thrilled with the result, deciding to downsize recently after their children had grown up.

“I have known the sellers for many years, and they are thrilled with the result today and to be passing this beautiful home onto a new family,” Mr Keenan said.

“This area is very tightly held, and this home ticks all the boxes. It is north facing, filled with natural light, on a large block and in one of Kensington’s best streets,” he said.

“The market is truly fantastic at the moment. We are seeing that people really value their homes more than anything in a post-covid world.”

“The level of expat enquiry is overwhelming at the moment; I had so many families coming to look through this property on behalf of loved ones overseas who are trying to get their head around the market in Sydney at the moment,” Mr Keenan finished. 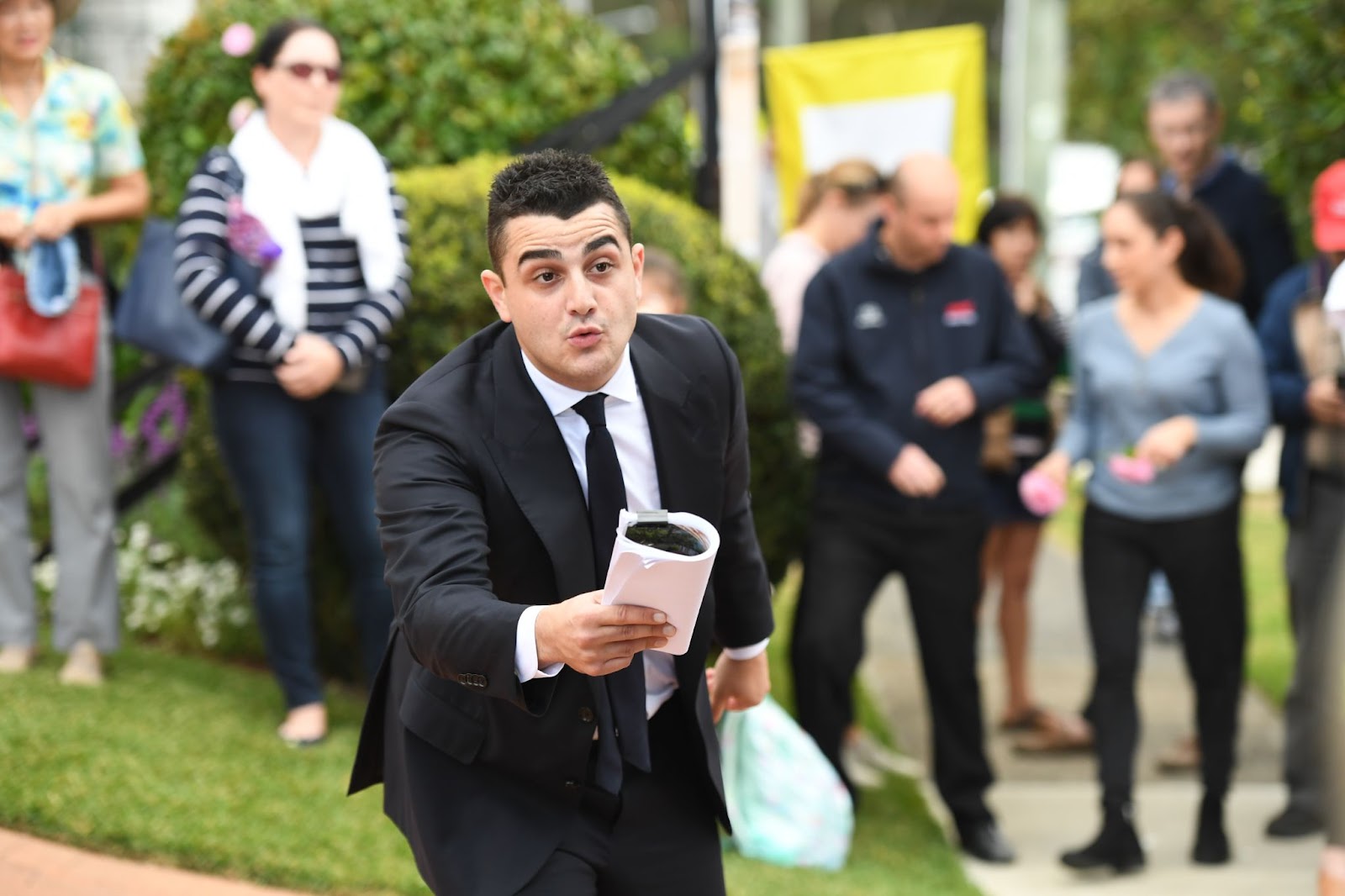 Ray White North Ryde agent Russell Sheffield said the campaign had been extremely successful, with his phone ringing off the hook over the last few weeks.

“Our sellers today were over the moon, with the results coming in way above their expectations,” Mr Sheffield said.

“We were also really pleased for the buyers who have been looking to move into this area for a while now,” he said.

Mr Sheffield said the Ryde area is proving to be very popular with families due to its proximity to the city, amenities and the relaxed lifestyle. 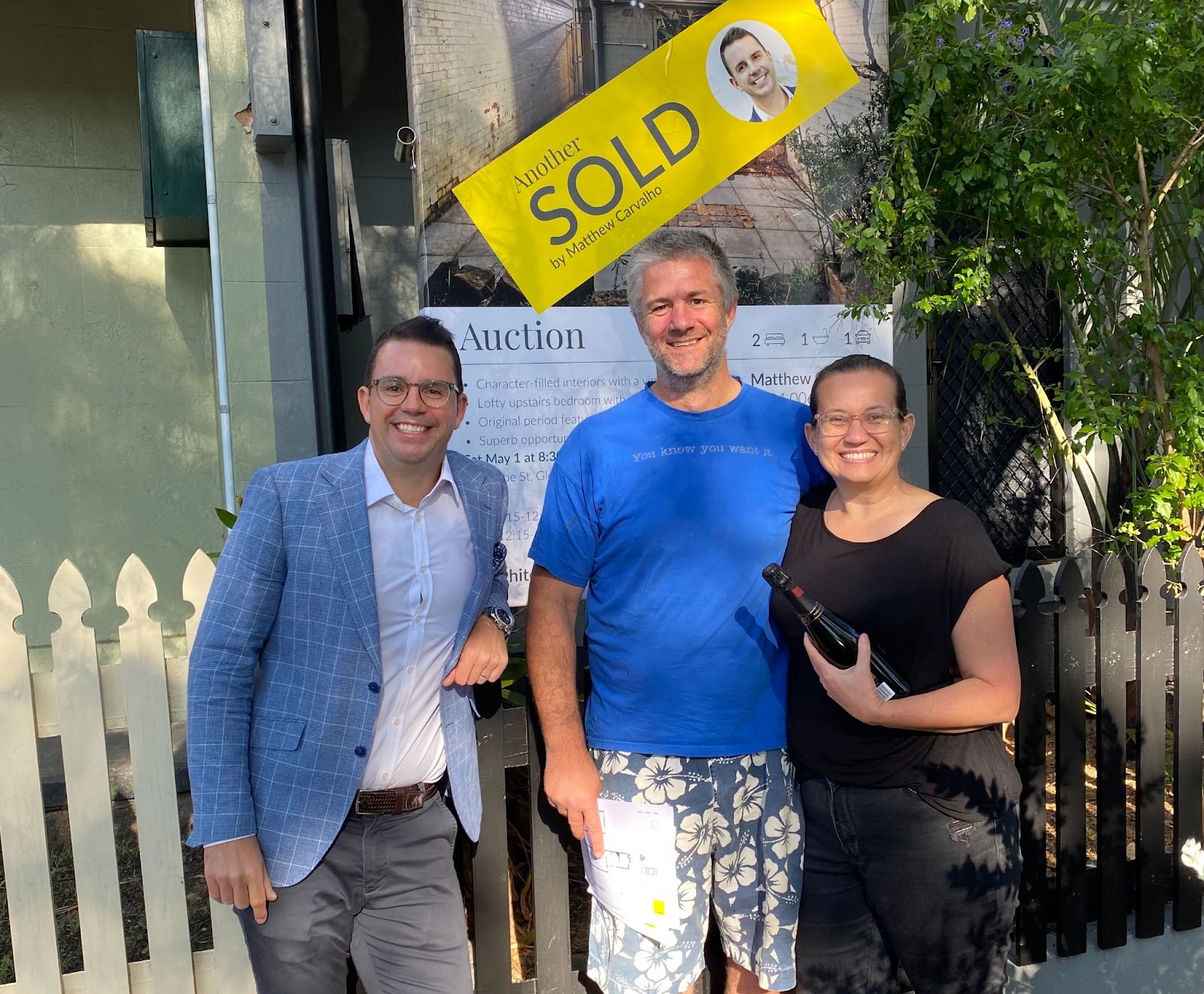 Glebe was the place to be today, with Ray White Surry Hills Director Matt Carvalho knocking two family homes under the hammer, both selling for far above their reserves.

A 2-bedroom terrace, ripe for renovation at 58 Glebe Street, Glebe sold for $1,471,000 smashing it’s reserve of $1,200,000. The campaign attracted 13 registered bidders to the auction, Mr Carvalho saying the appeal of the home was in it’s potential.

“We had 100 groups through the first open home. The price point attracted a range of bidders, and this house in Glebe has plenty of upside,” Mr Carvalho said.

The sellers, a young family who are upsizing to a home in nearby Leichhardt, said that they were absolutely thrilled with how the auction unfolded.

The winning bidders were a family who bought the home in anticipation of their older children to move in. 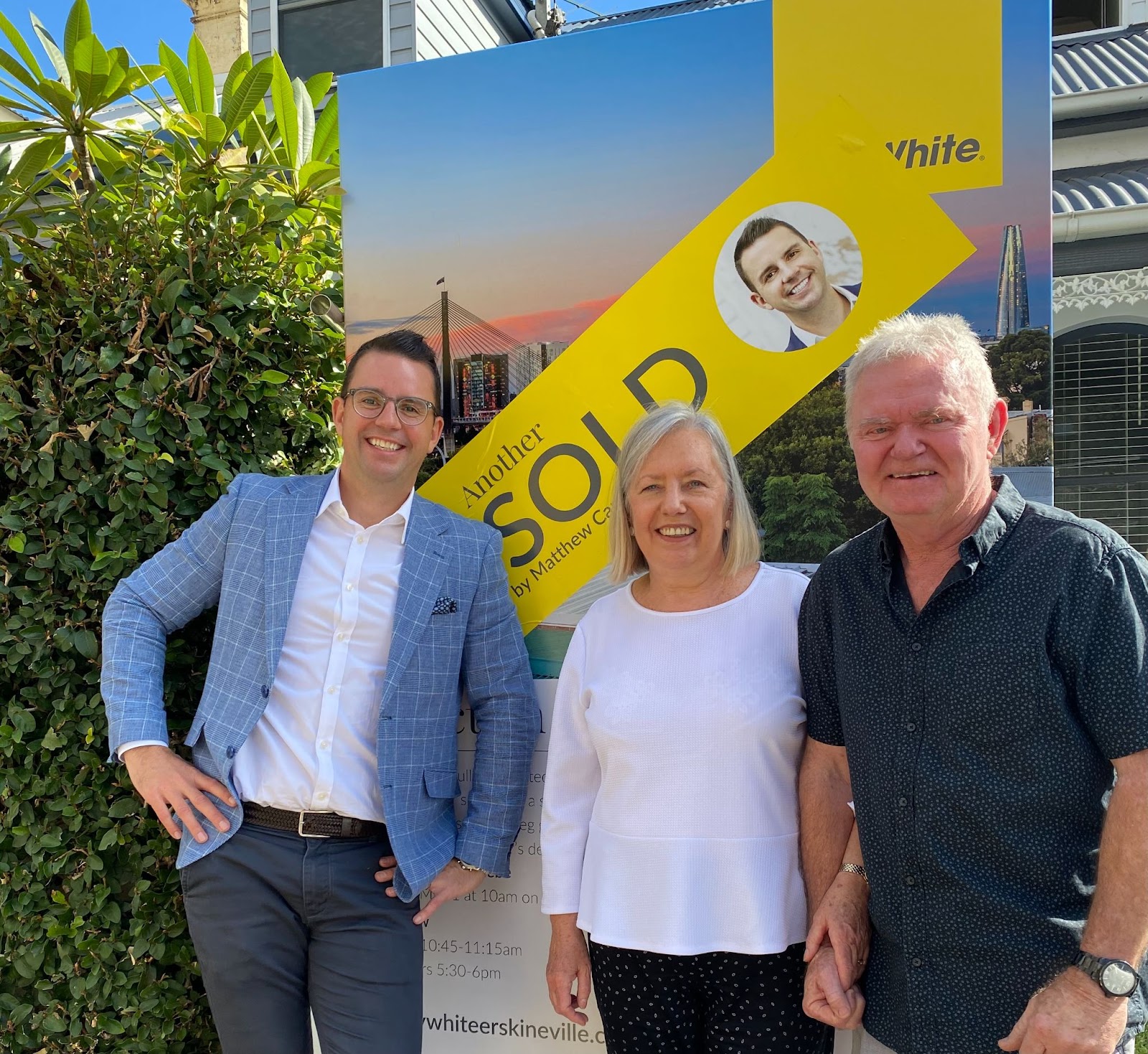 Mr Carvalho then went on to sell another terrace home at 7 Ferry Road in Glebe for $2,010,000. 10 registered bidders showed up to battle it out, with the winning bidders a family who own the pub a few doors down. They will use the home to house some of their management staff.

The sellers Warren and Anne said they were over the moon with the result, and that it was a sign of the suburb’s popularity.

“We were pretty comfortable heading into the auction; my wife and I had planned to stay if things didn’t go to plan. But the result was beyond our expectations,” Warren said.

“We saw a huge amount of interest in the campaign, and luckily the right buyer was there today to push it over the edge.”

“My wife and I have been here for 20 years. I grew up in Glebe and we just love the area, so we are very glad that we will be relocating just nearby,” he said.

“Based on preliminary data from the Ray White Group, today has seen an increase in the average amount of active and registered bidders per auction,” Mr Condon said.

“On the ground it was noticeable that buyers were holding back, waiting for properties to be announced on the market. After the bidding started, competition and momentum well and truly continued,”

“May is shaping up to be one of the best months we have ever seen, and the Victorian market is going from strength to strength.” 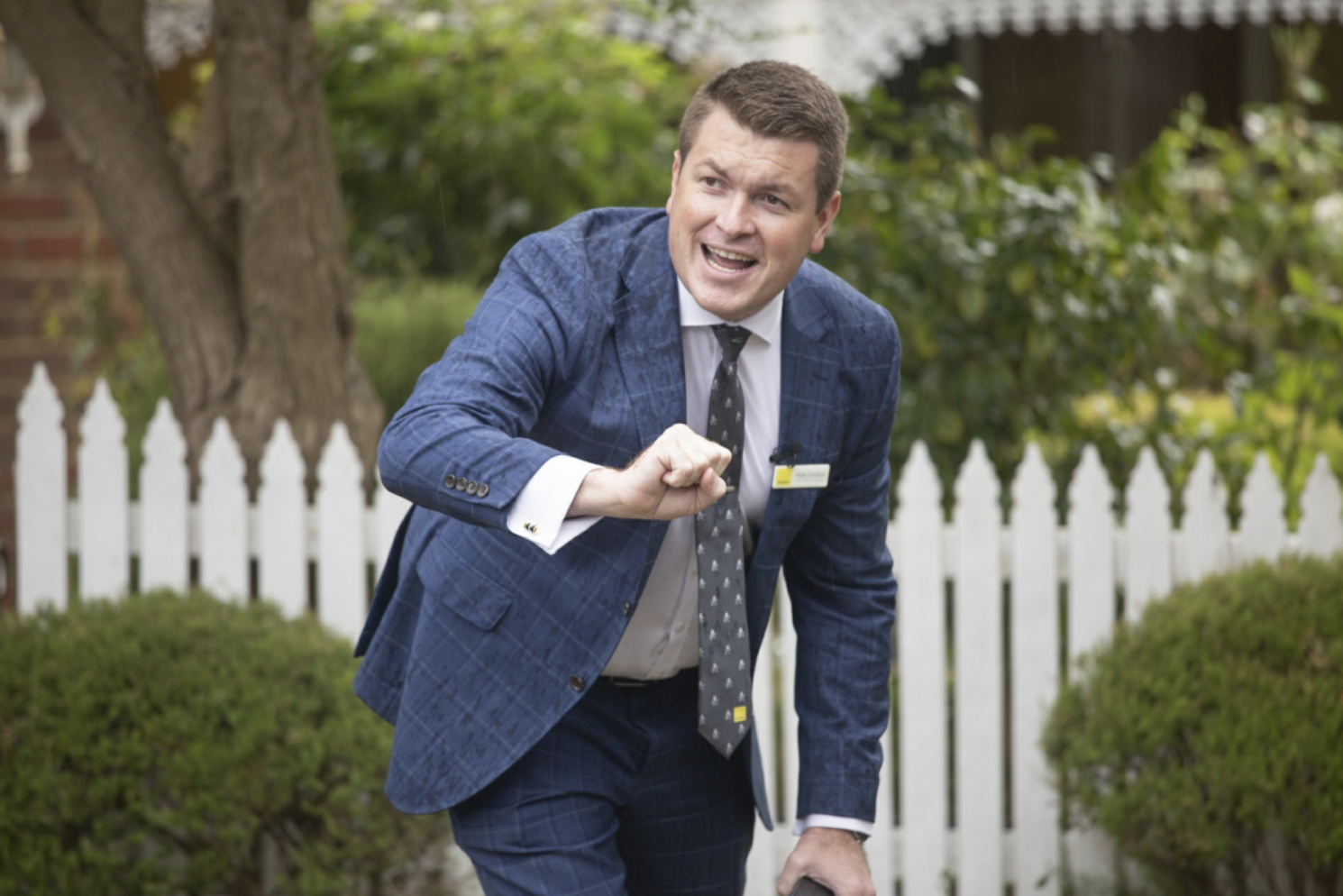 Kicking off the day in Melbourne’s East a humble brick unit at 2/20 Highton Street Ringwood sold for $675,000, a huge $145,000 over reserve in a deceased estate sale. The campaign, run by Chris Watson from Ray White Ringwood, attracted 15 registered bidders on the day.

“The unit is in a cracking location, this particular pocket of the suburb is highly desirable. It is nearby schools, shops and has great renovation potential which I’m seeing a huge demand for at the moment,” he said.

“The market is still really hot – reports are saying that the heat is coming off, but we are actually not seeing that at all,” Mr Watson said.

The lucky buyer was a first home buyer, who attended the auction alongside his brother. The pair plan to renovate the unit. 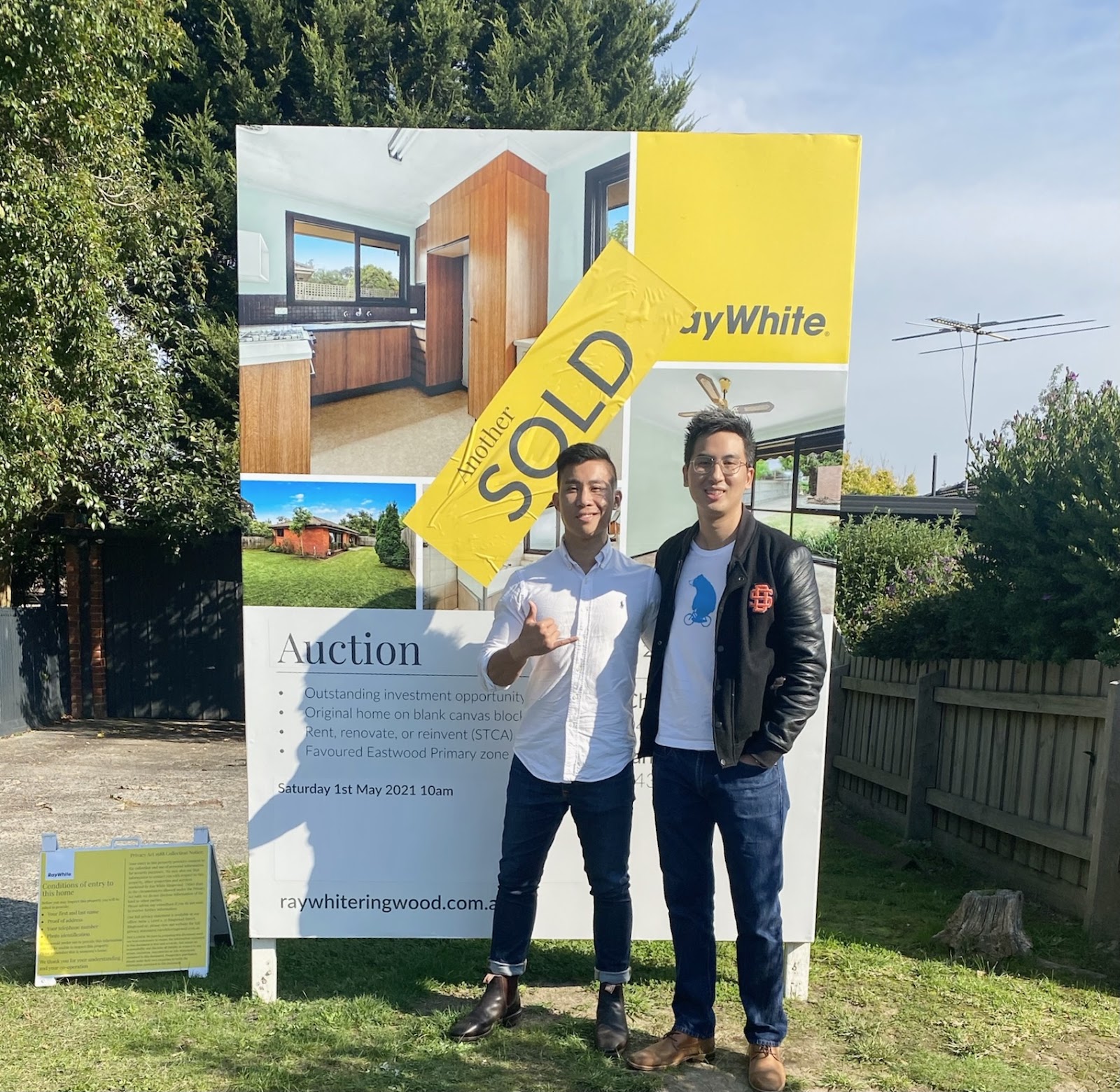 “The appeal was that It is a semi-rural area but still close enough to the city, on 11.5 acres of lifestyle land that people could do a lot with,” Mr King said.

“We had everyone from young families, to retirees and older couples, empty nesters looking for projects. The winning bidders were an empty nester couple from inner Melbourne, looking for some more space,” he said.

“We are experiencing a lot of buyers looking to live more rurally, who can work from home and enjoy the lifestyle.”

Mr King said Diamond Creek currently has one of the lowest median number of days on market, for this reason. 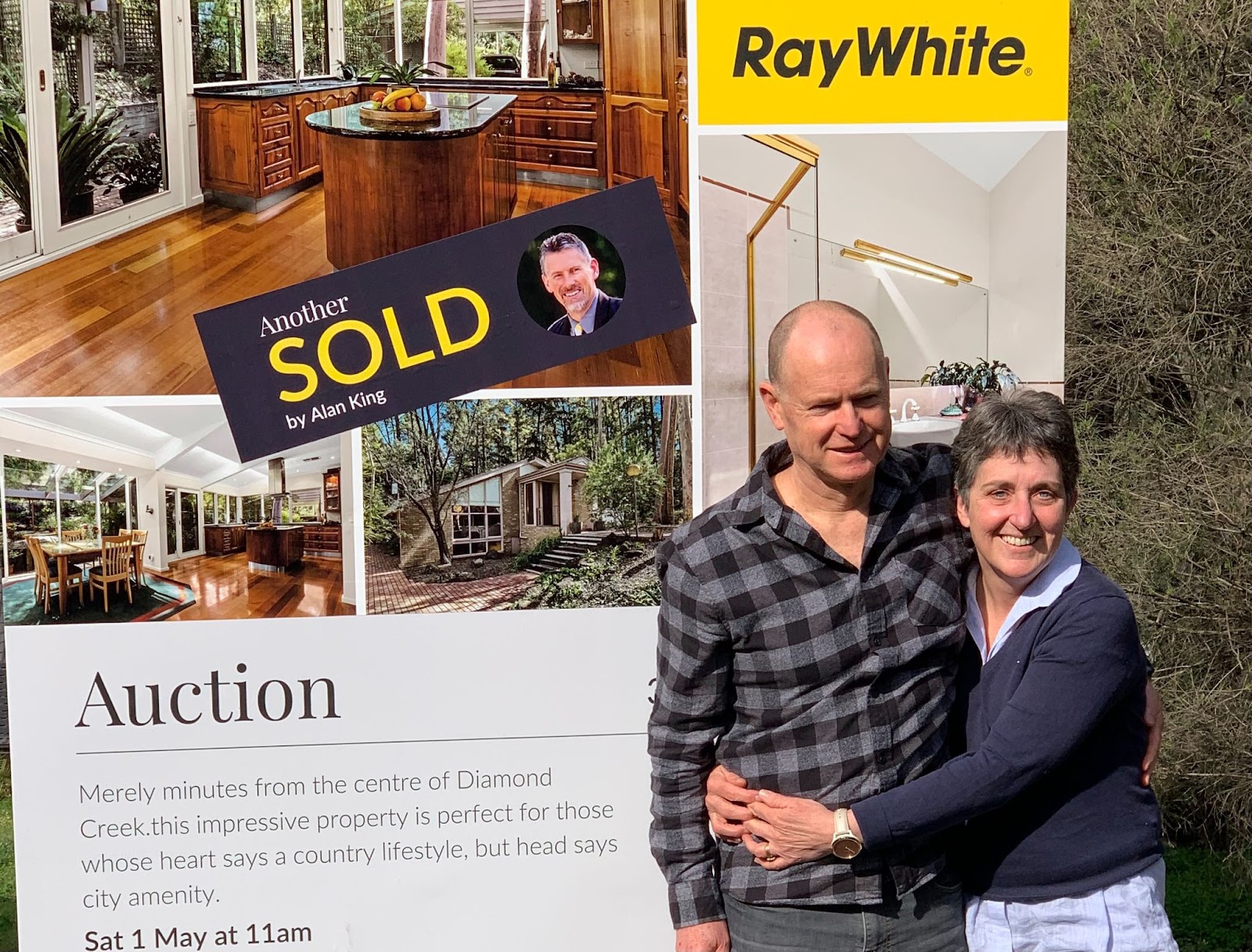 The auction drew a huge crowd of over 150 people, spilling out on the quiet suburban street, and attracted 12 bidders.

Ray White Manningham agent Milan Kinda said that the massive interest in the property was mainly from first home buyers, due to the achievable price bracket and the location.

“The buyer was a young lady who was thrilled to finally get into her first home. She, amongst all the other buyers, loved the proximity of the home to the park behind,” Mr Kinda said.

“It is a completely original mid-century home that has never been sold before, so it also has quite a lot of development potential.” 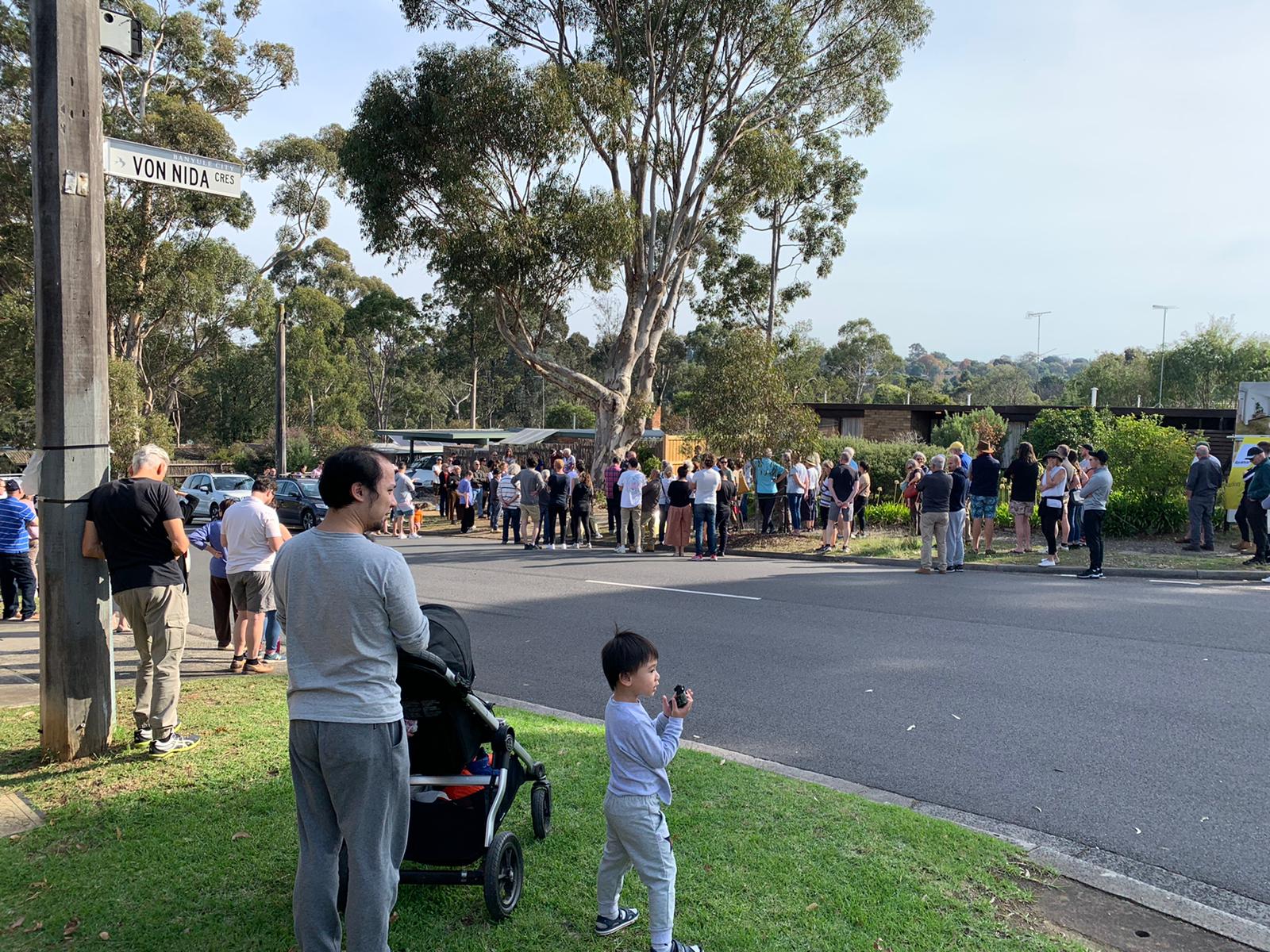 A drizzly day in the Sunshine State couldn’t keep the bidders away. Ray White Queensland Chief Auctioneer Mitch Peereboom said that it was another outstanding week of auctions, with both in-room and onsite performing well.

“The average number of registered bidders has remained consistent week to week, and we are getting huge sale prices as a result of competition created on auction day,” Mr Peereboom said.

“We are advising sellers not to take the first offer that comes along and not to do the off market deal. If a buyer is willing to pay a number today, there are very likely other buyers who are prepared to pay more.”

Ray White Ashgrove agent Liliana Mauri said that the sellers were over the moon at the result and are now planning to move to Brunswick Heads for a lifestyle change.

“I am thrilled for both the sellers and the buyers. The young professional couple who won the auction have been looking for their dream home for 12 months. There were tears of happiness on both sides!”

“It is really special to see people finally get into their dream homes, with so many bidders missing out at the moment,” Ms Mauri said. 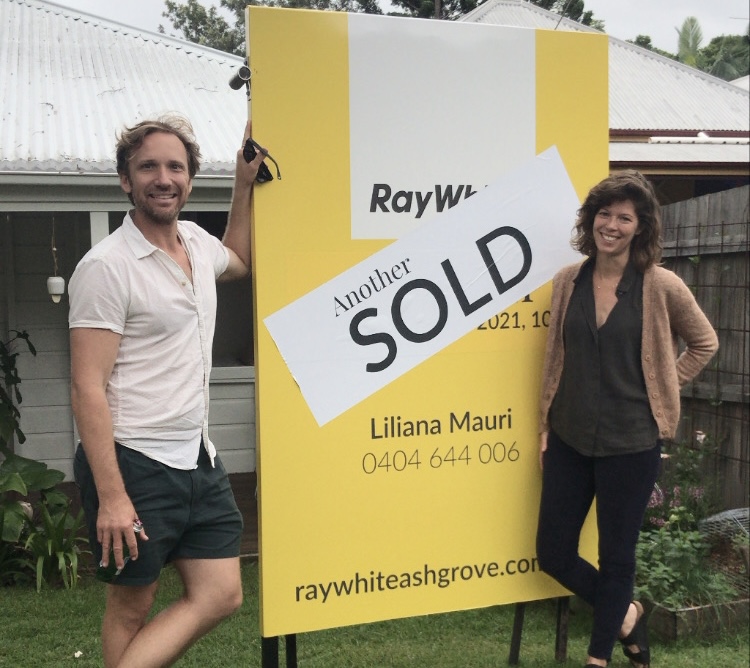 Around the corner, 22 Hibiscus Avenue in Ashgrove sold for $1,700,000, making it the biggest sale of the day for the river city. After 11 registered bidders battled it out, a young family came out on top.

Ray White Ashgrove agent Brigette Righton said that the campaign saw more than 100 groups come through, with the main interest coming from families.

“This little pocket of Ashgrove will always have massive appeal to families,” Ms Righton said.

“The market is crazily hot, with everything that we are listing getting multiple good solid offers within a matter of days,” she said. 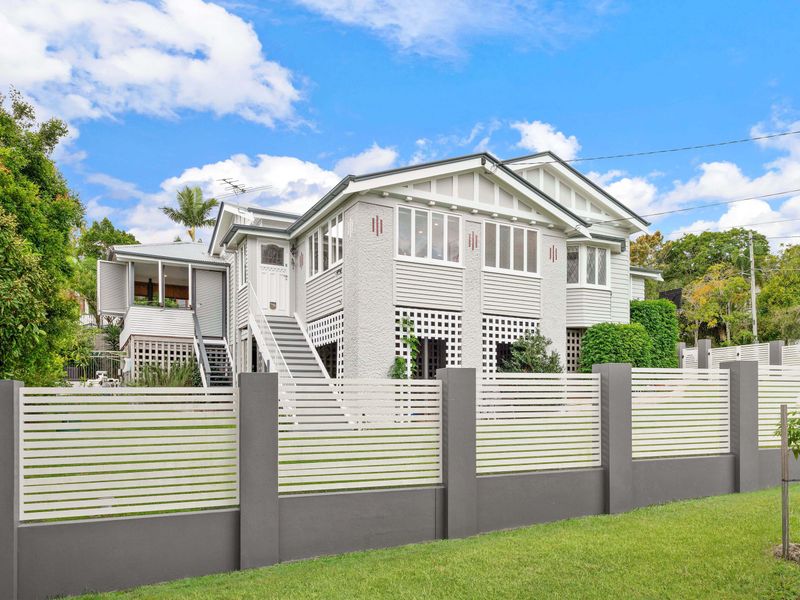 In South Australia, Ray White SA/NT Chief Auctioneer John Morris said the sun was out in Adelaide, and sellers were having an early spring.

“Throughout South Australia, there were 187 auctions scheduled with over a third of them being Ray White auctions, which is fantastic for the yellow brand,” Mr Morris said.

“I have had an average of 10 registered bidders today, and nothing seems to be slowing down. My hammer keeps dropping from auction to auction,”

“We have a fantastic May in store, and I believe we are in for a bumper winter,” Mr Morris said.

Alex Diamond from Ray White Norwood had a cracking sale at 35 Coorara Avenue in Payneham South, for $1,222,000. The home sold for well above reserve as 19 registered bidders fought it out.

“The sheer size of the property made it so popular, and an opportunity like this rarely comes up in the area,” Mr Diamond said.

A developer won the auction, and Mr Diamond said that most of the interest had come from developers. The home had been in the same family for many generations and was ready to be sold and developed on.

“As soon as we list something at the moment, it sells straight away or under the hammer, for a premium,” he said. 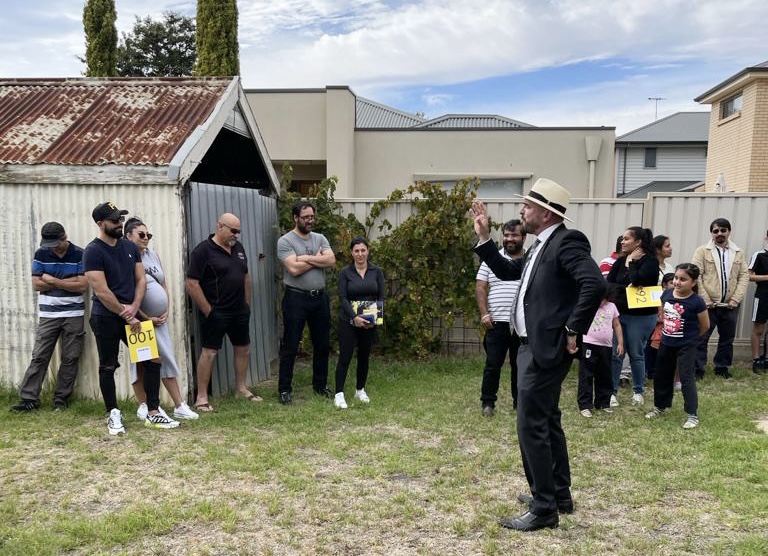 In nearby Holden Hill, 692 North East Road in Holden Hill sold for $422,000, pushing up past the set reserve price of $397,000. There were 9 registered bidders at the home with development potential.

“The fact that we had 9 registered bidders interested in this main road property gives you an idea of the buyer demand at the moment,” Mr Stapleton said.

Most of the interest in the property came from investors who were then looking to develop, and the winning bidder was an investor.

“The market is going really well in Adelaide. We are seeing upwards of 20 registered bidders at many of our auctions,” he said.