The price surge we are experiencing is being driven by a lot of things. Very low interest rates, freer lending and high household savings rates are obvious drivers. However high levels of confidence from booming economic growth, a large number of incentives available, particularly for first home buyers, and a general desire for bigger homes and more space have also contributed. 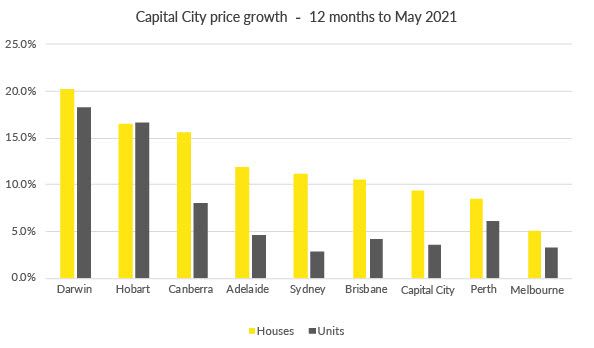 The city that is seeing the slowest growth is, for now, Melbourne with the rolling lockdowns having some impact on buyer confidence.

While growth is particularly strong and we can see that buyer activity remains strong, conditions are likely to stabilise over coming months. Already we have seen bidding activity slightly reduce over the start of winter and listing volumes continue to rise. Adding to this are some changes to bank behaviour. Despite no move by APRA to reign in lending, some banks are starting to increase stress testing for potential buyers.

Similarly, fixed mortgage rates are starting to creep up, even though official rates remain on hold.

A bigger impact on pricing would be significant restrictions put in place by APRA, or alternatively a move by the Reserve Bank of Australia to increase rates. For now, inflation does appear to be under control but any sustained significant increase to this would likely put very low interest rates at risk.