The year ends on a high for Ray White

NO ONE predicted the year 2020 but once again Australians have shown that property is still a safe bet during uncertain times.

As 2020 draws to an end, Australasia’s leading real estate group has come out on top maintaining its dominant 24 per cent auction market share nationally, recording outstanding sales results and some impressive personal bests.

In October, the leading group booked a record $5.71 billion in total unconditional sales but quickly topped that number with $6.68 billion in sales in November – the best in its 118 year history. 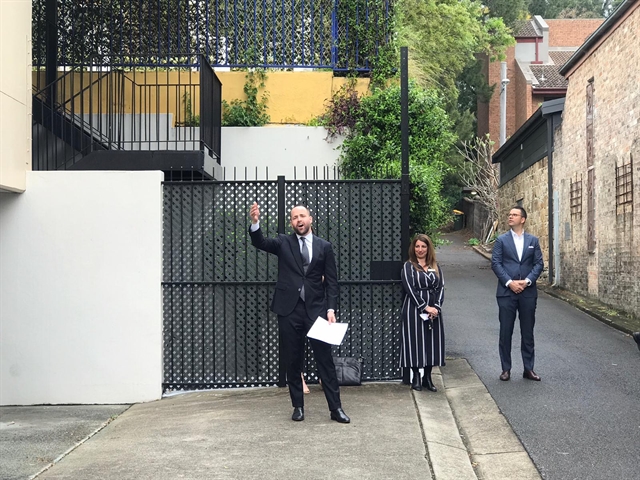 Ray White Queensland CEO Jason Andrew conducts an auction at 5/191-195 Bridge Rd Glebe to a crowd of eager buyers. The Glebe unit sold for $1,117,500 through Ray White Surry Hills Associate Director Matthew Carvalho.
“If anyone had said in April 2020 that we would sell more than $6 billion of property in November…..well no-one would have ever dreamed of such a thing let alone say it,” Ray White Managing Director Dan White said. “Well, we have now beaten our all-time best sales result, set just last month, with $6.68 billion in sales in November.

“The jaw-dropping result is some 34 per cent higher than the same period last year. The continued momentum shows the undeniable underlying strength in the Australian and New Zealand property markets, which have been building enormous momentum over the past six months.”

Auctions have played a large part in the Ray White Group’s 2020 success as one of the most visible examples of the enormous buyer demand present in the market. Since January, the leading auction group booked 16,000 auctions across the country while the national clearance rate for the year currently sits at 60 per cent, up 7.36 per cent on 2019. The momentum is still building with 924 booked this week alone in the final run up to Christmas. Nationally there were 4.5 average registered bidders for each auction which is an increase of 1.2 on the same period last year. Average active bidders also rose by 0.3 to 2.6 per auction. The increase of bidder activity speaks to a wider trend of intense buyer activity in a market with decreased stock levels. Sellers received 10 per cent more on average by selling under the hammer at auction than by accepting a prior offer. 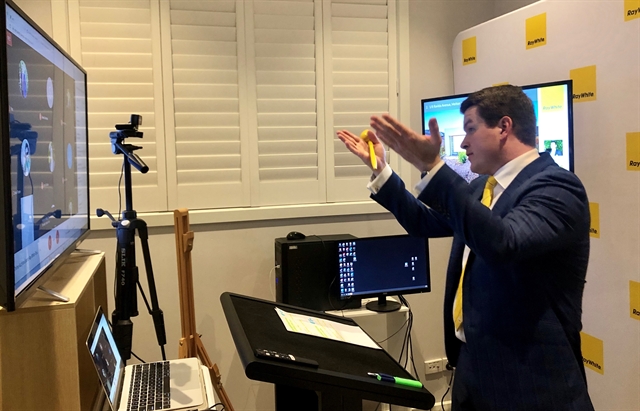 Ray White Victoria and Tasmania Chief Auctioneer Matthew Condon conducting an online auction from his living room during Stage 4 restrictions.
Ray White is the clear auction market leader with 24 per cent market share nationally in 2020. Our market share jumped to 40 per cent during COVID-19 within 24 hours of the Prime Minister banning outdoor auctions in March, as we moved to online live auctions.Since 24 March, we have conducted 1162 online live auctions nationally. We cleared 54.1 per cent under the virtual auction hammer, with 4.7 registered bidders, 2.7 active bidders.

As we look back at our results for the year, new listings finished down by 2 per cent on last year and down 11 per cent on the year prior. However, sales spiked 6.4 per cent which saw just under 50,000 sellers successfully transact their properties since January.

To add to this, Mr White said the records set in October and November are in short, driven by intense buyer competition.“We have been highlighting record levels of buyer activity since May,” Mr White said.

“All our buyer metrics remain impressive and these metrics give us confidence that the current momentum should endure well into next year as so many potential buyers will finish 2020 with unfulfilled ambitions.

“The healing process in the broader economy continues. Super-low interest rates and an improving job market have underpinned this recovery which will tick along in 2021.

“With international borders still shut and all Australians holidaying at home this year, we believe this will be a strong summer for all our sellers and buyers, a summer to remember.” 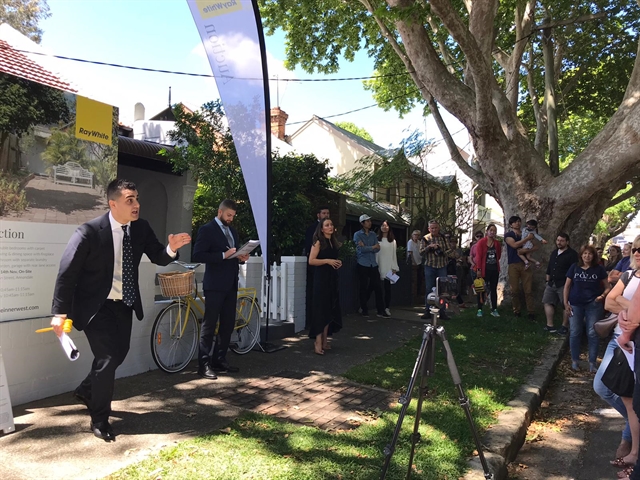 Ray White New South Wales retained its crowning position as the busiest auction market in Australasia and achieved a personal best in November. The Sydney market as a whole remained strong throughout the whole year.Since January, Ray White Sydney offices booked 5063 auctions to achieve a 68 per cent clearance rate – up 3 per cent on last year – and recorded a record high of 5.4 registered bidders. Some 117 auctions are still booked to proceed before December 31, with 69 of those on Saturday alone. 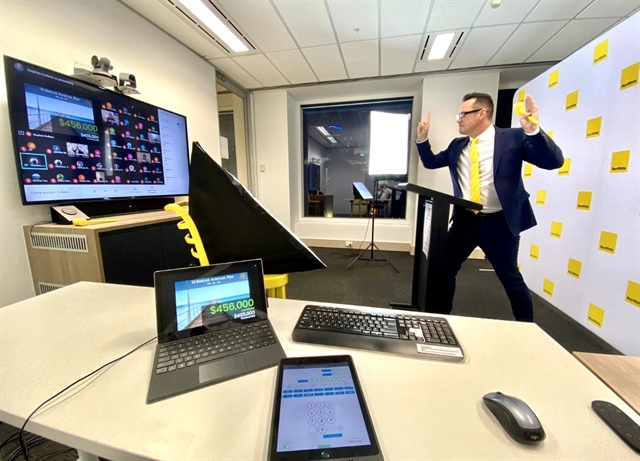 Ray White auctioneer Jeremy Tyrrell still brought the same energy and emotion to every one of his Victorian online auctions.

Victorians were hit hardest this year by the tough restrictions but their property market made a head-spinning recovery which saw Ray White achieve a personal best in November. Melbourne members booked 3994 auctions over the course of the year to date with another 212 booked before the end of December. Of these auctions, 114 are scheduled for this Saturday. Clearance rates have also stayed high as the leading group recorded 66.3 per cent of all properties sold at auction. There were 4.6 average registered bidders per auction. Both numbers increased on last year.

The state also outperformed all rivals by embracing online auctions during the lockdowns and since March 24, Victorian members conducted 903 online auctions too with many auctions calling the action from their spare bedrooms, living rooms and even garages!

Ray White Queensland Chief Auctioneer Mitch Peereboom calls his first auction in a castle as the medieval Spanish inspired 14 Ashley Rd, Chermside West home was sold under the hammer for $880,000.

Ray White Queensland also recorded a record sales result in November and had an outstanding year of auctions in which the network grew auction market share by 3 per cent to 35 per cent. The Ray White Brisbane network conducted 1780 auctions and achieved a clearance rate of 50 per cent along (8 per cent higher than 2019) with 4.5 average registered bidders since January to date. Up until the end of December, Ray White Brisbane members will take 74 properties to auction with 14 of those on Saturday.And in South Australia, Ray White again had a personal best month. In Adelaide, Ray White members conducted 675 auctions from January to today with another 49 properties set to go under the hammer from now until the end of the year. The yearly clearance rate to date hit an impressive 60 per cent, up 14 per cent on last year, while average registered bidders soared to 5.7 – 2.7 above this period last year.

The top residential auction sale of the year for the Ray White Group came out of Sydney. Ray White Double Bay Managing Director Elliott Placks and Associate Director Ashley Bierman successfully sold ‘Fintry’ 101 Victoria Rd, Bellevue Hill (pictured above) in an amazing under the hammer sale in November. The six bedroom mansion sold for $16,100,000 to a local buyer who was one of the six registered bidders to attend the on-site auction.

Topping the leaderboard for most registered bidders in 2020 was the auction of 3222 Kyogle Rd, Mount Burrell on June 19 which drew a massive 52 interested buyers. The 259ha property sold for $2,000,000 through Ray White Rural Murwillumbah Principal Brad Franks and agent Stewart Baericke. The auction was conducted by Ray White NSW Chief Auctioneer Alex Pattaro. In the end, the Mount Burrell property received 224 enquiries and 96 inspections. 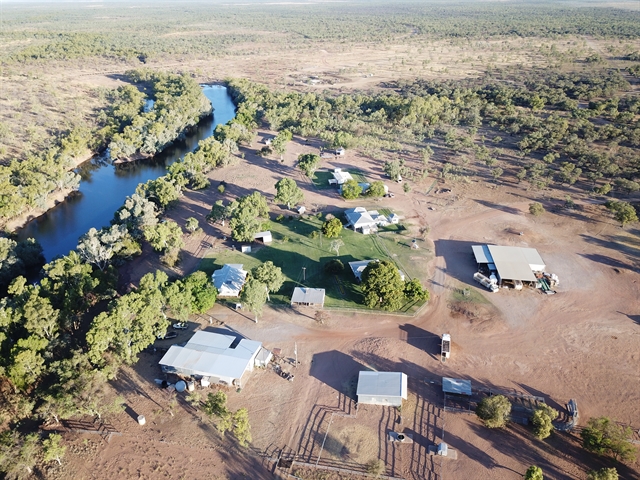 The biggest under the hammer auction sale of the year for not only the Ray White Rural network but the group in total was a 97,500ha cattle station north west of Cloncurry (pictured above). ‘Nardoo’ sold for $35 million through Ray White Longreach and Rural Barcaldine Principal Bill Seeney and Ray White Rural Queensland Principal Bruce Douglas. Ray White Queensland Chief Auctioneer Mitch Peereboom conducted the online auction. The bidding opened at $20m with the property selling to a local Cloncurry grazier family as 11 registered bidders tuned in.

The year isn’t over yet as there are still some standout auctions to come for Ray White. Between now and December 31, Ray White has 545 properties scheduled to sell under the hammer, while 245 of these will be called this Saturday.

Andrew McCulloch, Ray White NSW CEO will also have a big weekend as his four bedroom family home at 7 Alfreda St, Bowral (pictured above) goes to auction. It has been popular with Sydney buyers seeking a treechange.

“During the first open we welcomed 14 groups through the home. They loved the beautifully done renovations, greenery and comfortable living it represented, it ticks all the boxes for Sydney buyers,” Ray White Bowral selling agent and director Gene Fairbanks said.

This weekend Dean Vasil of Ray White Earlwood is confident of an outstanding result at 12 Woodlawn Ave, which has already received 91 inspections with 14 repeat buyers.

“Most of the buyers are coming from the inner west and inner city suburbs. They are looking at this property as something that will help get their foot in the door of the sought-after Earlwood market,” Mr Vasil said.

“It’s in a great spot and immaculate condition and we’re getting a mixed bag of downsizers, upsizers and first home buyers interested in the home.”

Mr Vasil added that much of the interest has been at the $1,300,000 price range. Ray White auctioneer Tim Snell will conduct the 12:30pm auction.

While in Melbourne, Ray White Ferntree Gully agent Matt Morris expected the auction of 1/12 Margaret St, Clayton (pictured above) to generate an impressive result. First home buyers and investors have both been keen to snap up the three bedroom home as a shortage of stock continues to drive the market.

“Due to what we’re finding right now, a lot of property owners are going into harder assets because the dollar is devaluing right now and they want to get away from cash,” Mr Morris said.

“Which is why we are seeing a large resurgence of buyers in the marketplace with interest rates low as ever and low stock on the market, especially coming into December.

“I tend to find that not a lot of stock hits the market in December but due to the above reasons, I saw the value in putting it on before Christmas with how strong the market is.”