The start of the pandemic was a popular time for first home buyers to get into the market. Between January 2020 and January 2021, the number of first home buyers increased by 70 per cent, hitting the second highest number on record nationally and record highs in Victoria, Western Australia and Canberra. As the property market gained momentum, the level of activity pulled back by 32 per cent.

Most recent data on first home buyer activity released this week from the Australian Bureau of Statistics has shown that loan commitments are still well above long term averages. The bigger problem is that low and middle income earners are now making up a much smaller proportion of first home buyers. Data from Loan Market has shown that the proportion of first home buyers that earn either $120,000 or less as a couple, or $90,000 or less as a single has fallen significantly over the past four years. In 2018, 45 per cent of loans provided by Loan Market were to people with these income levels. This year, it has declined to 32 per cent. 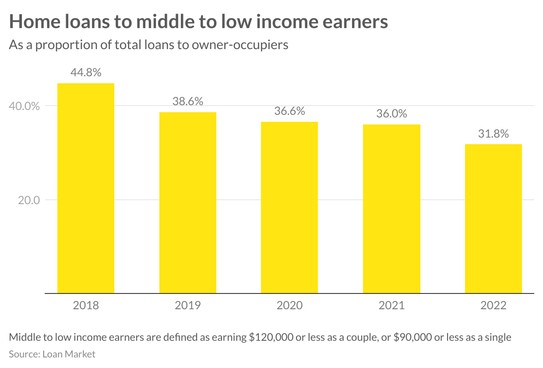 While it has become harder to buy your own home, it is likely that we will see an even better market for first home buyers this year for a number of reasons.

1. Prices are starting to moderate

Interest rates are on the move and with this comes a slower market and the potential for price declines. First home buyers have historically not been deterred by price declines. Most recently, we saw almost record activity from this group during the start of the pandemic. Even though at the time there was a lot of concern that house prices would decline rapidly, it didn’t deter first home buyers who were instead more motivated by additional government incentives that became available to them.

2. First home buyer support is a major focus by both sides of government

First home buyers are getting a lot of attention right now in the Federal election. In the most recent Federal Budget, the Liberal Government extended the first home buyer guarantee scheme while last weekend, Labor announced a shared equity scheme. At a state level, there are numerous incentives offered such as stamp duty concessions. With affordability unlikely to improve dramatically any time soon, this focus on making it easier for first home buyers to get into the market will continue.

It is always better to buy a property to live in rather than be a long term renter, primarily because at retirement it puts you in a vastly different financial position to someone that has to pay rents.

Consider someone that purchased a median priced home in Sydney 10 years ago versus someone renting. If you are renting, you would now be paying $7,800 more per year as a result of rental increases. Right now, you would be paying less on your home loan than when you purchased – even with yesterday’s rate rise, your annual repayments would have reduced by $20,000 over that time frame. You would have also benefited from significant capital gain on the property that you own.

Over the long term, the gap becomes even higher. And right now, an added challenge is that although house prices are moderating, rents are continuing to rise rapidly.

The CEO Sleepout – I’m Sleeping Out!

How To Turn Unused Nooks And Crannies Into Storage Spaces